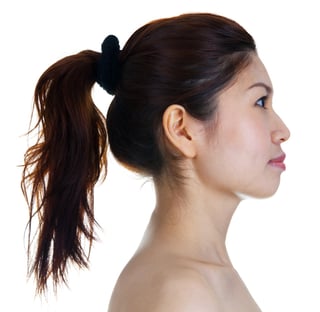 Bimaxillary protrusion is an ethnic facial feature of most ethnic Chinese and Malays in Singapore. As with all facial features, if the protrusion develops excessively, it will pose an aesthetic challenge. Unlike an underbite, where the lower jaw has grown to be longer than the upper jaw, diagnosis of whether a particular state of jaw protrusion is excessive and warrants surgery is rather grey. Where do we draw the line, where normal degree of protrusion ends and a dentofacial deformity begins?

What is bimaxillary protrusion?

It is a condition whereby the alveolar process of the jaw i.e. the part housing the teeth, is more developed than the basal bone of the jaw. This part, collectively termed the dentoalveolar process, when excessively developed gives an aggressive appearance. It also portrays a more primordial look, reminiscent of our primate ancestors. Primates have larger jaws with which to chew their food but as man evolved, with the invention of cooking and processed food, the need of large jaws and teeth is reduced, giving modern man much smaller jaws. The differences in jaw size and proportion amongst different ethnic groups is no a function of masticatory needs but simply variation within the normal range for the human species. Most patient presenting for treatment complain of their protruding front teeth.

When I returned to Singapore, I find that our Chinese demographics was quite similar to Hong Kong and hence there was also a lot of people who have bimaxillary protrusion. However, the difference is that there is wider acceptance of a bimaxillary appearance in Singapore. As such, even though it is also arguably the most common facial feature here, it is infrequently corrected surgically.

After a few years of practicing in Singapore, I began to understand why. In Hong Kong, management of dentofacial deformities was surgically-driven while in Singapore, it was orthodontically-driven. As a surgeon, my assessment and treatment planning starts with the final facial appearance in mind. The occlusion of the teeth is a secondary concern. I believe that a patient who is comtemplating surgery is seeking a change in facial appearance more than an improvement in the occlusion of the teeth. However, my orthodontist colleagues tend to focus on achieving an ideal occlusion as the treatment objective. With tradition of patients seeking the orthodontist as the first line of advice, most of these cases ended up with orthodontic correction only. Which is fine, if that achieves the results that the patient has in mind.

A few years ago, a patient came for a second opinion. She was undergoing orthodontics and has had four premolars extracted to correct her protruding front teeth except that it was not what she wanted. Being of Filipino descent, she is also ethnically bimax and happy about it. As the orthodontic treatment progressed, she began to noticed that her lips started to fall down and she lost the labial fullness that she had. She felt that it made her look older than before and wanted to reverse the process. Eventually, I referred her to another orthodontist who reversed the treatment and opened up the spaces again to accommodate four premolar implants to replaced the extracted ones.

Surgeons also sometimes make the mistake of assuming that patients with bimaxillary protrusion simply wanted to bring the jaws in. I have had another patient who came for a reversal of his orthognathic surgery just two weeks after the surgery. He found that new look unaesthetic, saying that the facial features had become more Caucasian which was not what he wanted. Eventually, he went overseas to have it correct back to what it was originally and four implants were inserted to replace the extracted teeth.

In both cases, the patients were happy with their convex facial profile. Indeed, a mildly protruded look has a certain youthfulness about it. It gives the fullness to the face and withstands the aging process better. The question is how to identify the situations when orthodontics and/or surgery are able to achieve a better result. The only way is to spend as much time as possible to understand what the patient is looking to achieve. Sometimes, after many hours of discussion and treatment planning, the final plan may be to do nothing.