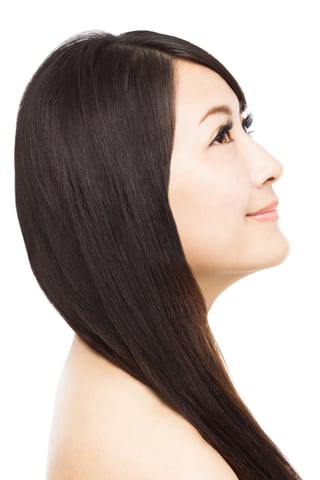 Many years ago, an orthodontic colleague referred a patient to me for extraction of four premolars. His orthodontic plan was to retract the front teeth back. However, when I asked the patient what made her sought orthodontic treatment in the first place, she said that she found her upper front teeth too protruding and that she was unable to close her lips. Looking at her face, even without smiling, most of her upper incisors could be seen. She had difficulty closing her lips, which were pushed outwards due to the protruding jaw bones. I called the orthodontist to share with him my view that this case was best treated with orthognathic surgery rather than braces alone. He agreed with me but thought that the patient would not accept surgery. That day, instead of extracting her four premolars, I explained the option of orthognathic surgery to correct her condition instead. Eventually, after due consideration, she decided to have surgery instead. I referred her back to her orthodontist for pre-surgical orthodontics and she came back after a year for the surgery.

The most common dentofacial deformity corrected in Singapore is the underbite i.e. the lower jaw that is longer than the upper jaw. It is the most easily recognized deformity by patients and widely accepted that surgery is the best way to manage it. However, given our largely Asian population in Singapore, the most common deformity is the bimaxillary protrusion. However, this is so common that many do not see it as a deformity but as dental malocclusion that can be treated with just orthodontics.

Many patients with this condition complain of upper protruding teeth, just like the underbite patients complaining of a protruding lower jaw. Many orthodontists would correct this by extracting four premolars and retract the front teeth back. While this can reduce the protrusion of the teeth, it does not address all the concerns of the patient. Let look at the case mentioned earlier.

From the frontal appearance, the lower facial height was disproportionately longer than the mid and upper facial height. This was an indication that the vertical growth of the upper jaw is excessive. In addition, the entire crown of the central incisors were seen even when she was not smiling. In her natural relaxed state, the lips were incompetent. 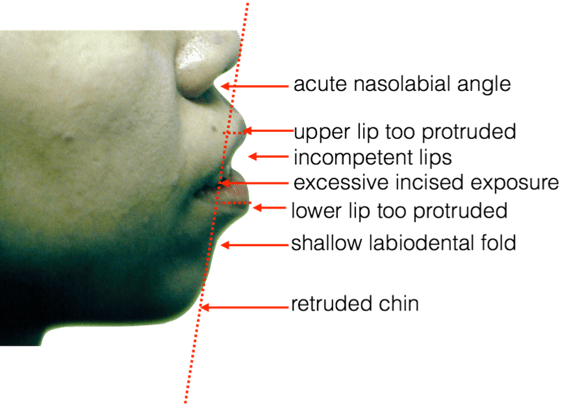 From the profile view, the nasolabial angle i.e. the angle between the upper lip and the nose, was rather acute. This was an indication that the alveolus i.e. the tooth-bearing part of the upper jaw had grown excessively in the horizontal direction. Both the upper and lower lip was located more than 5mm in front of the aesthetic line, an imaginary line from the tip of the nose to the chin, indicating that the lips were located too far forward of the face. The incompetent lips and excessive incisal exposure seen on frontal view were also evident here. The labiomental fold, i.e. the angle between the lower lip and the chin was very shallow, which is an indication that the alveolus of the lower jaw was also excessively developed in the horizontal direction. Finally, the chin was retruded.

Radiographic assessment was done and the findings corroborated the clinical diagnosis. The diagnosis for this patient was

Orthodontics alone will not address the vertical maxillary excess (VME). Corrective jaw surgery was needed to shorten the vertical dimensions of the upper jaw. The following treatment was done:

The upper jaw was separated from the skull base and cut into four segments. With the two premolars extracted, the front two segments containing the front teeth were repositioned backwards to close the space left by the extracted premolars. The entire segmentalized upper jaw was then repositioned upwards by 8mm. This achieved the effect of retracting the front teeth as well as reducing the vertical dimension of the upper jaw, effectively tucking it under the upper lip.

The lower jaw was only excessively developed in the tooth-bearing part while the basal bone was normal. The front part of the jaw containing the incisors and canines were detached from the base and repositioned backwards to close the space left by the extracted premolars

The surgery took six hours which was longer than the average double jaw surgery. This was due to the segmentalization of the jaws which required precise cutting as well as repositioning of the multiple fragments. The patient stayed in the hospital for three days and post-surgical orthodontics was started one month after the surgery.

This case demonstrated a common problem in the management of bimax protrusion. Because bimax protrusion is commonly treated with orthodontics alone, it is easy to miss the outliers where orthodontics alone would not have given the patients satisfactory results. It is important that patients do their own research and seek several opinions before deciding on the treatment plan. Different clinicians see things differently and it is important that the doctor and the patient are on the same page before any irreversible procedure is done.