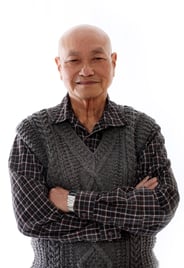 A elderly man presented with multiple missing teeth that were restored with removable dentures in the upper and lower jaws requesting for them to be replaced with fixed prostheses. Examination showed that the denture was not fitting properly and the remaining teeth were also not in good condition. Some of the teeth had been restored with porcelain crowns which were also not in good condition. He had generalized bone loss due to chronic gum disease but the teeth were stable except for the upper right second molar.

This was a fairly common presentation in my practice. I offered him two options. He could

either choose a conservative option of keeping whatever teeth that were salvageable and replacing the missing teeth with dental implants or to remove all his teeth and full mouth dental implants. There were pros and cons of each.
With the conservative plan, the main advantage was that some natural teeth would be kept. However, that would require the new implant supported prostheses to be constructed around the natural teeth. This would have constrained the positioning of the implants and hence the final prosthesis. Furthermore, the long term prognosis of the natural teeth were guarded and should they fail in the near future, more implants would be needed. As such, the patient decided on extracting all his natural teeth and have full mouth implant-supported prostheses instead. 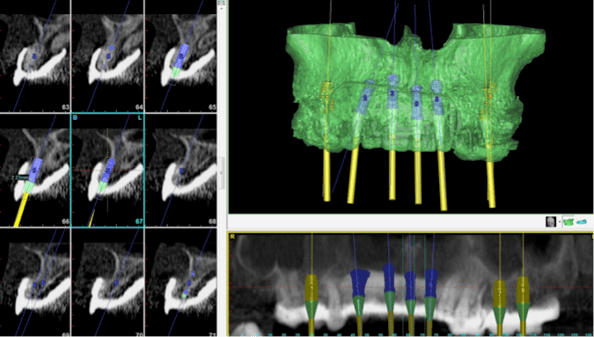 One of the challenges to a full mouth dental implant-supported prostheis is the transition from a partially dentate state to a fully edentulous state. Many patients are unable to manage a complete denture, especially for the lower jaw. To avoid the inconvenience of having to adapt to a set of full dentures in the interim period, we decided to go with immediate loading of the implants with a fixed temporary prosthesis. This was done using CT-guided dental implant surgery. First, a radio-opaque scan prostheses were made and CT scans were taken and the data were entered into Simplant Planner, a dental implant treatment planning software. Based on the ideal setup of teeth in the scan prostheses, implants were placed in the model generated in the software. The plan was uploaded to the Simplant facility in Belgium.

Based on the plan, a surgical guide was made by stereolithography. The purpose of the guide was to ensure that the implants would be placed in exactly the positions as planned. The guides were then couriered back to a Singapore laboratory for fabrication of provisional prostheses that would be fitted onto the implant on the day of implant surgery. On the day of surgery, the guides were fitted over the existing teeth and implants placed in accordance to the guide. Once the implants were inserted, all the remaining teeth were extracted and the prostheses fitted onto the implants.

Three months later, after the gums and extraction sockets had healed, fresh impressions were made for fabrication of the final prostheses.

For some patients, extraction of salvageable teeth may appear to be wasteful and they opt for a conservative treatment of keeping the natural teeth for as long as possible. The conservative option, however, is not less expensive and may even be more expensive as it requires individual replacement for the missing teeth; compared with a full arch prosthesis which can be supported by just 4-6 implants. As such, the majority of patients when confronted with this choice, often choose to go with a full mouth implant option.