A 30 year old patient male patient lost his lower front teeth due to a motorcycle accident one year ago. The bone supporting the teeth was also destroyed in the process. One year later, he presented for reconstruction of the lost bone and teeth.

A CT scan showed that there was a significant loss of vertical height of the bone. While there was sufficient bone to place implants to replace the missing teeth, the prosthesis would not be aesthetic. Functionally, there would also be compromises as the gaps between the prosthesis and the gum would trap food and being deep-seated, cleaning would be difficult.

The alternative was to augment the site before placing the implants. The objective was to raise the bone level to the ideal state for implant placement i.e. at the same level of the bone supporting the remaining teeth.

There were two ways of doing this. One way was to harvest a block of bone from the hip and screw it to the deficient part of jaw. After a few months, the bone graft would consolidate and integrate with the jaw bone and implants could be placed. However, the success rate of such vertical bone grafting was low. Furthermore, even if successful, it was difficult to achieve the bone level of the adjacent teeth. 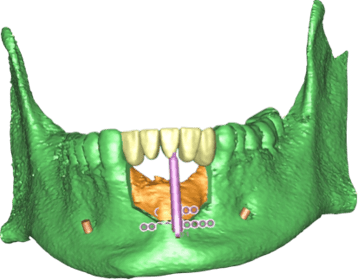 Distraction osteogenesis was chosen instead. This is a process whereby the bone to be augmented is divided and then gradually moved apart on a daily basis. A plan was simulated on a treatment planning software Simplant. In the program, the virtual teeth were placed on the model generated from the CT scan data. The distraction device was also placed on the model and the vector of movement of the segment to be distracted predetermined. Once the position and vector of movement of the device is set, the bone is cut. This segment, however, retained its attachment to the soft tissue which maintained the blood supply.

One week after surgery, the device was activated daily for seven consecutive days. Each day, the device moved the segment 1mm higher. This small movement of the segment allowed new bone formation to begin in the gap but before it mineralized, ie “hardened”, the segment was moved again. Over a period of seven days, the bone moved 7mm thereby increasing the height of the bone by that amount. 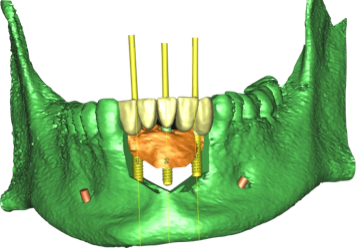 Vertical augment of the jaw bone by distraction osteogenesis gives a more stable result than bone grafting because the soft tissue is stretched gradually and the bone that is being moved is not stripped of its blood supply at all times. This combination of maintaining the vitality of the bone and gradual expansion of the soft tissue envelope ensures minimal shrinkage of the bone. 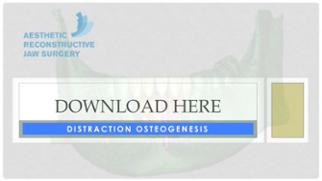