This is NOT a post about mixed martial arts. MMA in this post refers to maxillo-mandibular advancement. This is a surgical procedure of bring the upper jaw (maxilla) and the lower jaw (mandible) into a more forward position so as to open up the airway for breathing. Just as cosmetic jaw surgery is known as orthognathic surgery, “ortho” referring to “straightening” and “gnathic” meaning “jaws”, MMA is sometimes referred to as telegnathic surgery, with “tele” meaning “advancing”. Obstructive sleep apnea is a condition whereby breathing is blocked during sleep due to some anatomical structures obstructing the flow of air from the nose or mouth into the lungs. So, how does MMA solve the problem of OSA.
In Singapore, obstructive sleep apnea is mostly managed surgically by Ear, Nose and Throat surgeons while non-surgical management is handled by pulmonologists or neurologists. When the ENT specialists are entrusted with the management of the condition, they naturally draw on what they do best, which is performing surgery in the ear, nose and throat, or just the nose and throat, since the ear is not quite involved. Surgical procedures were developed to reduce the soft tissues in the nose, the soft palate and the throat. Reduction can be achieved by cutting the excess tissue or by applying a radiofrequency probe to shrink the soft tissue. The rationale for soft tissue surgery is to remove the amount of tissue that can block the airway, thereby causing the sleep apnea. However, relapse rate is high and frequently, many patients need repeat surgeries after a few years.

Maxillo-mandibular advancement surgery approaches the problem with a different perspective. Instead of removing soft tissue encroaching on the airway to reduce the obstruction, moving the jaws forward increases the airway space volumetrically. The most common analogy to describe this is the tissue box. Soft tissue surgery is like removing tissue paper from the box to increase space. MMA is making the box bigger. MMA has a higher success rate in OSA treatment than just soft tissue surgery. Advancing the jaws forward not only opens up the airway, it also tighten up the soft tissues around the throat, making it less flabby and hence less likely to fall back and obstruct the airway.

As with all treatment options, it is not without its drawbacks. In general, ENT surgeons and patients consider jaw surgery to be more invasive than soft tissue surgery. The thought of breaking the jaw bones and re-arranging them into different positions sounds scarier than inserting a radiofrequency probe into the soft palate and the nose. However, to a maxillofacial surgeon, it is a routine procedure. Technically, MMA is not different from orthognathic surgery for dentofacial deformities. In fact, many, though not all, patients with OSA do have a dentofacial deformity that can benefit from jaw surgery from the masticatory and aesthetic perspectives. This is not to say that jaw surgery is a walk in the park. Far from it, it is a fairly invasive procedure but in experienced hands, it is a safe procedure with minimal morbidity. The usual risks and potential complications of orthognathic surgery applies to MMA as well. In addition, OSA patients are usually older and as such, a thorough pre-operative medical workup is needed to ensure fitness for surgery.

The other major consideration that is often cited by patients is the change in facial appearance. Naturally, moving the jaws forward will result in changes in facial appearance. In fact, it is the major motivating factor for patients undergoing orthognathic surgery. However, an OSA patient may not be interested in changing the way he looks. This is an unavoidable consequence of the surgery. Many are concern that bringing the jaws forward will give them a more Neanderthal look.

This is often unfounded as the MMA patient is usually middle-aged and would have some laxity in the facial skin. This laxity will “absorb” some of the forward movement of the jaws and in some cases, may actually result in tightening of the skin which is a positive enhancement aesthetically.

In any case, as with orthognathic surgery, MMA for OSA should undergo pre-operative simulation to predict the expected changes in facial appearance in the process of trying to achieve the OSA treatment objectives. If necessary, it is possible to only bring the back part of the jaws forward to open the airway, without moving the front part of the jaw, thereby keeping the facial appearance unchanged.

Ultimately, the choice of treatment should be based on the needs of the patient. In a case of mild OSA, doing MMA is perhaps an overkill. Conversely, in cases where there is a skeletal discrepancy contributing to the OSA, doing a minimally invasive procedure that does not solve the problem is meaningless. 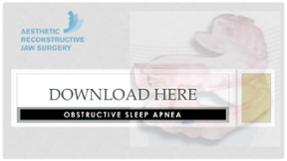