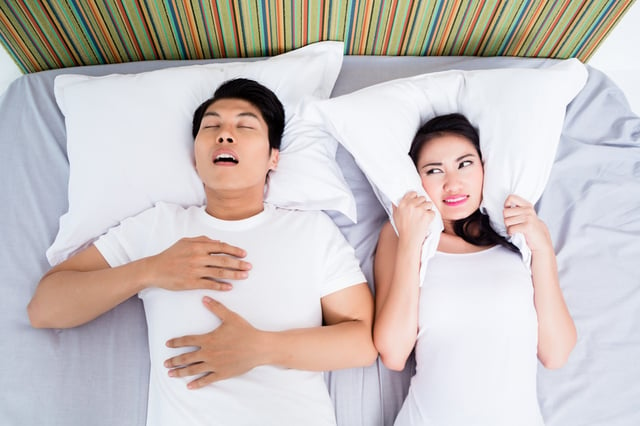 Obstructive sleep apnea is defined by the American Academy of Sleep Medicine as a “sleep-related breathing disorder that involves a decrease or complete halt in airflow despite an ongoing effort to breathe.” Put in a more comprehensible way, it basically means that it is a condition whereby your breathing gets obstructed during sleep. How does this happen? Whether we are asleep of awake, air goes in through either the nose or the mouth or both and enters the lung whereby oxygen is provided to the rest of the body. However, on the way in, air can be obstructed in the nose, by the soft palate, by the tongue, the tonsils, the soft tissue of around the throat or a combination of the above structures. The obstruction causes a reduction in the amount of air entering the lungs leading to a wide range of chronic illnesses. In Singapore, surgical management of OSA is mainly done by Ear Nose & Throat (ENT) specialists while non-surgical management is mainly by either the respiratory physicians or neurologists. Some of these specialists have formal sub-specialty training in Sleep Medicine. Oral and Maxillofacial Surgeons (OMS) and dentists can offer effective alternative treatments that are not used as often as they should.

Common procedures done by ENT surgeons include uvulopalatopharyngoplasty (UPPP)(cutting the soft palate and tissue surrounding the throat), using radiofrequency probes to shrink the tissue, repositioning the tongue, etc. These procedures are relatively non-invasive and some can even be done in an outpatient clinic. However, many of these procedures have rather limited and short-term success of about 40%.

Maxillomandibular advancement (MMA) is a procedure to bring the upper and lower jaws forward to open up the airway. This is similar to cosmetic jaw surgery that OMS commonly do. It also tightens the muscles of the airway, preventing it from collapsing and causing an obstruction. Studies had shown success rates in the region of 89%.

Despite a better success rate, maxillomandibular advancement is usually not the first line of treatment. This may be due to the perceived invasiveness of the operation compared to tissue reduction procedures such as UPPP. The common practice has been to try the less invasive procedures first and to fall back on the MMA should the earlier surgeries fail. This is not always a good approach as the previous surgeries can compromise the result of the MMA. For example, if UPPP has already been done, advancing the upper jaw forward may result in a velopharyngeal incompetence, whereby the seal between the mouth and nose is not effective anymore. This can result in regurgitation of fluids when drinking.

There is no denying that MMA is an invasive procedure but it is not uncommonly done. MMA is technically the same as corrective jaw surgery albeit done for a different reason. In many patients with OSA, there is often a short jaw that predisposes to obstruction of the airway. An operation to advance the jaw helps to correct both the skeletal deformity as well as open up the airway. However, there are some OSA patients who do not have a skeletal discrepancy and there are concerns that advancing the jaws forward may give these patients an ape-like appearance. However, such fears are usually unfounded as the most OSA patients are usually middle age as compared with the orthognathic surgery patients who are usually in their late teens and twenties. Older patients would have lost a fair bit of elasticity of their skin and facial muscles. Advancing the jaws forward actually stretches the skin and may even give a rejuvenated appearance.